So far, the only birthday party the twins had had was in 2012 right after we moved to our current house. The twins designed some games for their guests to play in our empty basement. I also taught the kids balloon twisting and fed them with pizza. It was pretty simple but kids were very easily satisfied.

This year, the twins realized they should have another party. I was somewhat hesitant as my father-in-law was in critical condition then. But the twins promised they would handle everything.

They checked flyers from Freshco, Food Basics and Walmart to find snack. They filtered the invitees. They brainstormed the games to play. They prepared the stuff needed for the game. Here is the complete list of preparation.

This included food, snacks, drinks, items for the loot bag, guest roster and event agenda. The twins also ordered pizza online. Chen shopped for the food from FreshCo, Nofrills and Food Basics. We brought the twins to Walmart for the items used in the party. They made cut-outs from a yoga mat. They also ordered loot bags and t-shirts online from Walmart. It took me a few hours to cut and sew the Velcro on the T-shirts and name tags. The twins also tried using the sewing machine.

So on Saturday June 11, 2016. The twins hosted their birthday party. 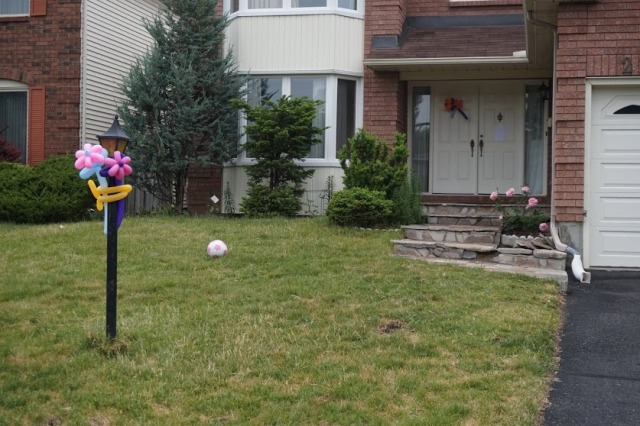 The activity that impressed me the most was the game played at nearby Kingsmere Park. The twins are the fans of the show Running Man.  They mimicked the show and designed the 撕名牌 or “Nametag Elimination” game. They divided the attendees into two groups. One team put on teal T-shirts and the other one put on Orange ones.  I hid the yoga mat cut-outs at the park. After they played a round of soccer. Then they started searching for the cut outs. The game rule is that If you saw or suspected that someone on the other team found a cut-out, you will need to rip their name tag and if you succeed, you get one of their cut-outs that the person you ripped found. If the person don’t have a cut-out, then you just leave them be. After ripping their name-tag you have to stick it back on. The team that found 5 out of 9 cut-outs first won. Kids were very excited in searching, chasing, and ripping the nametags.

Notably, there were mosquitoes in the park even during the day time. Kids become thirsty quickly after all the running, chasing and kicking around.  So the lesson learned was that we should bring water and some mosquito repellent when we play outdoors.

By the time we went home, Chen has taken home Pizza and Ice-cream cake. Kids swarmed in our breakfast room bustling all the way along to consume the food and drink.

After the party, the twins were encouraged to follow up with all the guests and their parents/guardians

First of all, thank you all for coming to join our first 11th birthday party. They all had fun. Thank you all for the generous gifts, we enjoyed them. We played a fun round of soccer at Kingsmere park, followed by a fun game of search for pink cut yoga mats, while ripping name tags. Finally, we had a great party feast, including pizza and ice cream cake. They all devoured the tasty food like they were starved for years, after playing at the park!   Hopefully you have received a link to our party photos stored in Google+ pictures.

A happy party didn’t need to be energy-draining.

A mother of twins and a boy.
View all posts by Ke Wei →
This entry was posted in Uncategorized. Bookmark the permalink.